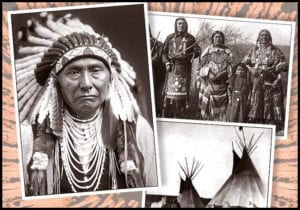 President Thomas Jefferson was deeply curious about the peoples who lived in the West of the unexplored American continent.
Rumor was all he had to go on since only a few white fur traders had ever ventured into the unknown West.
According to Undaunted Courage, by Stephen Ambrose, Jefferson speculated that the native American peoples were wandering Welshmen or even the lost tribes of Israel.
In 1804, when he sent explorers, Meriwether Lewis and William Clark into the unknown, Jefferson found out the peoples of the West were much more interesting than his speculations.
In the fall of 1804, Lewis and Clark met a Sioux clan in the upper Missouri. The 900-person nomadic group, living in 100 teepees, lived on a horse and buffalo economy. Lewis and Clark were invited to a Sioux council. With much ceremony, they were carried on a decorated buffalo robe to a huge council teepee.
Inside the lodge, Ambrose reports that 70 elders and warriors sat in a circle to smoke, and attempted to discuss trade, even through language barriers.
Later, the two watched a war dance and commented on the music and drums, which they said were delightful.
They feasted on buffalo.
This was the extraordinary beginning of the explorers’ encounter with the many and varied peoples of the West.
They met the Omaha, the Mandan, Poncas, Oto, Missouri, and more, peoples whose names and ways are still part of the vast canvas of North America.