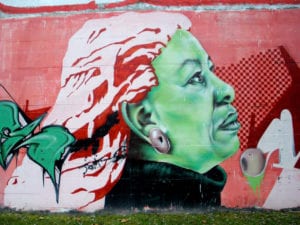 The passing of Toni Morrison in August 2019 marked the loss of one of the most impactful authors of modern times.
Morrison was the first black woman to receive the Nobel Prize in literature. According to her obituary in The Washington Post, Morrison’s recognitions ran the gamut from the Pulitzer Prize to a four-time selection in Oprah Winfrey’s book club. She also worked as an editor at Random House starting in the late 1960s and later worked as an essayist and lecturer in addition to a professor at Yale and Princeton universities.
Morrison’s work placed African Americans, and particularly black women, at the center of her writing, which gave a voice to stories that had largely gone unnoticed. Her Nobel Prize in 1993 made her the first native-born American since John Steinbeck to receive that honor. Her Pulitzer-winning novel “Beloved,” published in 1987, was later made into a movie starring Winfrey.
Morrison was born Chloe Ardelia Wofford in Lorain, Ohio and was one of four children. She received a Bachelor’s degree in English from Howard University — later joining the faculty — and a master’s in English from Cornell University.