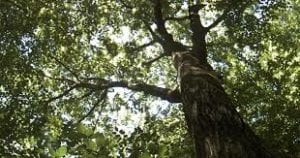 This is where things stand now: when someone mentions “tweet” and “tree,” they’re not necessarily referring to birds in branches.
A 110-year-old Red Oak at Harvard Forest in Massachusetts has an actual Twitter account and posts updates regularly. The social media savvy tree has more than 8,700 followers and has been posting regularly as @awitnesstree since July 2019 – via Tim Rademacher, a postdoctoral fellow at Harvard University and Northern Arizona University.
This isn’t the 87-foot tree’s first brush with fame. In 2017, it was the focus of a book about climate change, “Witness Tree,” by journalist Lynda Mapes – hence the Twitter handle. With the 50th anniversary of Earth Day coming on April 22nd and the theme being climate action, perhaps the tree will see an influx of media requests for comment.
According to Atlas Obscura, the tree is equipped with sensors that feed data to a bot Rademacher built to communicate what is happening in and around the tree. The Red Oak is one of the oldest in the forest’s Prospect Hill Tract, as much of the area was decimated in the Hurricane of 1938.
The sensors are wedged into the tree and around its vicinity; one sensor punctures the bark to measure the flow of sap, which is affected by water and temperature. This helps researchers understand how the tree responds to heat and drought. Other sensors measure changes in its trunk and branches. Commenters can even request and receive a selfie from the tree.
So how did the tree fare this past year? In late February it tweeted: “In 2019, it just kept raining and snowing. Overall, it was the 8th wettest year I have experienced here at Harvard Forest. We all need water, but when there’s too much, I have a harder time getting oxygen and keeping stable footing in the soil.”