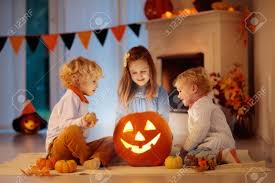 Halloween is now one of the biggest consumer holidays in America. According to the National Retail Federation’s 2014 Halloween Consumer Spending Survey, celebrants spent an average of $77 each on their costumes, candy, party decorations and greeting cards.
But more parents have safety concerns about their children out in the dark, knocking on the doors of strangers or dashing across the street. Children are more likely to be killed in a pedestrian/car accident on Halloween than on any other night.
You can make a great Halloween scene safe at home with some easy tricks.
Get glow make-up you can find at Halloween stores and smear it all over a jack-o-lantern. In the dark, it glows scary green.
Glow sticks make an especially frightening balloon. Break the stick to make it glow, put it in a balloon, blow the balloon up. Then draw a face and turn out the lights. Eerie!
Other tricks with a pumpkin to thrill the kids: Carve your pumpkin, making sure to cut out the top hat. Put a glass inside the pumpkin and fill the glass with ordinary dish soap. Add some dry ice to the soap. Boom! The pumpkin man spews enough gross but completely safe, soapy bubbles to delight any 8-year-old.
For treats, make the usual themed cupcakes. Put out the spicy queso surrounded by black and orange tortilla chips. Fill plastic pumpkins with candy corn, apples, mini-candy bars and gummy worms. And fill a cauldron with Dracula’s blood punch (add berry vodka for the adult version).
Then, fire up great movies for the season:
Monsters, Inc.; Casper; and The Adventures of Ichabod and Mr. Toad (G rated), Halloween; Hocus Pocus; Scooby-Doo; Raiders of the Lost Ark, Batman: Mask of the Phantasm and Beetlejuice (PG-rated for the not-so-squeamish), Young Frankenstein (for the fun), The Monster Squad (for the adventurous), Night of the Living Dead (for zombie fanatics) and The Haunting (for old movie fans).