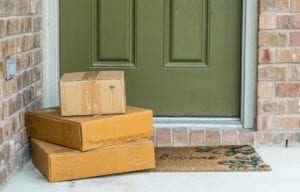 Christmas is here and the Porch Pirates are waiting to steal it.
Some new services are available to thwart the efforts of the thieves who steal packages from the doorstep. But awareness can help, too.
Porch theft has grown up alongside online shopping.
In 2017, UPS delivered about 750 million packages during the holidays while the U.S. Postal Service logged about 850 million, according to CNBC.
Meanwhile, about one in 10 adults have reported package theft.
Security cameras, either real or fake, can scare away would-be thieves. Many cameras are integrated into doorbells. But subtle cameras don’t usually scare off criminals, so manufacturers recommend actually posting a sign to tell criminals they are on candid camera.
Amazon is working on a way to prevent package theft with its new Amazon Key option, available to Prime members in a few dozen cities for about $250. The system is powered by an electronic front door key that allows a delivery driver to unlock the home and place the package inside.
For people with pets or concerned about privacy, Amazon has also introduced a Key In-Car service, which allows carriers to open a car trunk to store packages.
Amazon also has lockers available at places like Whole Foods that serve as a central drop off point from which the purchaser can pick up their package with a secure code.
Still, most people will have to make secure arrangements by having packages delivered to a work address or a trusted neighbor.