What Do You Call That Pretty Firework? 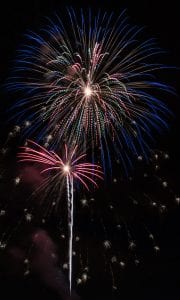 Cake. Chrysanthemum. Waterfall. If you’ve ever wondered what to call the different types of fireworks you see during a professional show, other than “that cool one that trailed off,” you’ve come to the right place — and can impress (or annoy) your friends afterward.
Here’s a sampling of official fireworks terminology from the American Pyrotechnics Association:
* Cake: A cluster of small tubes, linked by fuse, that fire small aerial effects at a rapid pace. They are often used in large quantities as part of a show’s finale.
* Chrysanthemum: A spherical break of colored stars that leave a visible trail of sparks.
* Falling Leaves: Stars that twinkle and flutter down.
* Fish: Large inserts that propel themselves rapidly away from the shell burst, often looking like a fish swimming away.
* Palm Tree: Rising comet (trunk) that bursts into six large trailing stars (fronds) and can also have small reports (coconuts).
* Peony: The most commonly seen shell type, with a spherical break of colored stars.
* Waterfall: Named for the shape of its break, this shell features heavy long-burning tailed stars that only travel a short distance from the shell burst before free-falling to the ground. They sometimes include a glittering through the “waterfall.”